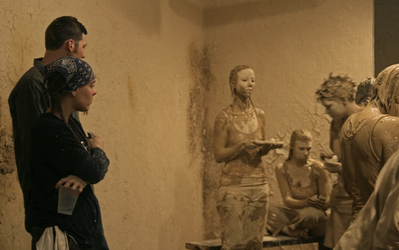 J.J. McCracken creates messy situations where performers grovel for access to resources. They are socially disconnected and eternally hungry. They are martyrs, misanthropes, thieves, ghosts, and the wronged.

Absurd and often painful tasks are endured as stress cracks form and failures reveal the body's limitations. Wet, shivering, clay-covered women eat potatoes made of clay for hours; blindfolded women hoard water, hauling it in pots that leak or break; a timekeeper fills a one-directional hourglass that slowly drains.

Built from the details of extensive research, these characters interrogate our corporate, political, and social landscapes while examining the artist’s own patterns of consumption. Recurring themes include malnutrition, water rights, free speech, and shouldering the weight of passing time.

Several recent works indicate a shift away from futility, including The Mouth of the Scold, commissioned by the National Portrait Gallery in Washington, D.C. for it’s “IDENTIFY: Performance Art As Portraiture” series, curated by Dorothy Moss. The piece is one chapter in a body of research and performance on the history of the “common scold” offense, a gender-based misdemeanor charge used to punish “outspoken” women. McCracken repurposes a ducking stool—an archaic punishment device that looks like a see-saw with a chair on one end that is plunged into a body of water. Using it as a lift during the performance, the artist accesses a space high on a wall in the museum’s Great Hall and installs a portrait of a woman among traditional monuments to men. The woman depicted in McCracken’s portrait is Marion B. Dunlevy, the first woman exonerated of the common scold charge (1972) for its unconstitutionality.

J.J. McCracken is the recipient of numerous awards and grants, recently including a Juror’s Choice Award (United in Passion & Pride exhibition, 2016), a Maryland State Arts Council Individual Artist Award in Sculpture (2014), a Louis Comfort Tiffany Foundation Award (2011/12), and two grants from the Puffin Foundation (2013 and 2011). McCracken holds a bachelors degree in Anthropology from The College of William and Mary (1995) and an M.F.A. in Studio Art from The George Washington University (2005). She attended the Skowhegan School of Painting and Sculpture in 2012.

J.J. McCracken is Co-Director of Red Dirt Studio in Mt. Rainier, Maryland, and is represented by CONNERSMITH in Washington, D.C.