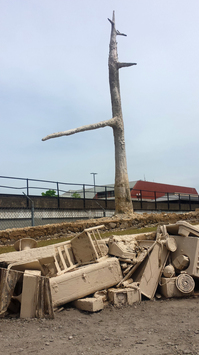 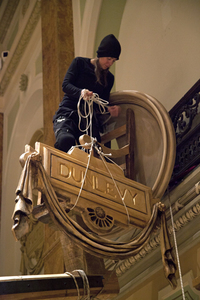 The Mouth of the Scold
The Mouth of the Scold is one chapter in a body of research and performance on the history of the “common scold” offense, a gender-based misdemeanor charge used to punish “outspoken” women.
McCracken repurposes a ducking stool—an archaic punishment device that looks like a see-saw with a chair on one end that is plunged into a body of water. Using it as a lift during the performance, the artist accesses a space high on a wall in the National Portrait Gallery's Great Hall and installs a portrait of a woman among traditional monuments to men. The woman depicted in McCracken’s portrait is Marion B. Dunlevy, the first woman exonerated of the common scold charge (1972) for its unconstitutionality. Image: Liz Gorman 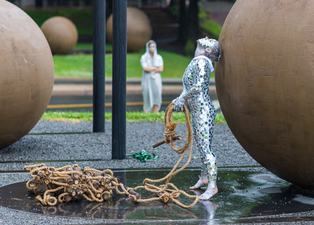 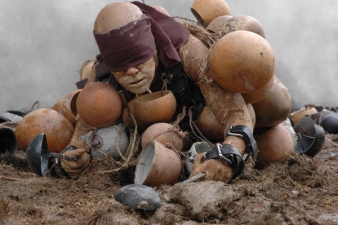 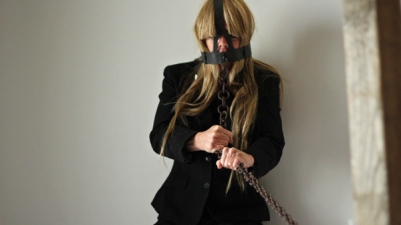 The Huntress
Performed on Capitol Hill in Washington, DC, The Huntress is built of details mined from local history, such as the arrest of Anne Newport Royall as a common scold (1829; a Hill resident and one of America's first female journalists).
The fanfare that surrounded Royall's trial intermixes with more recent challenges to free speech to construct a portrait of a contemporary woman peering at her gender through the lens of the past. Image: Nguyen Khoi Nguyen 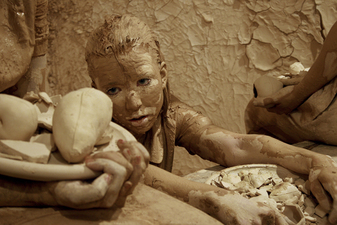 Hunger
A 3-floor installation with live activity and sound, Hunger uses geophagy (earth-eating) as a launching point for an experiential poem about need. The incessant consumption of a visually bountiful but non-nutritive food substitute is central to the main idea of the project. Image: Janine Parziale 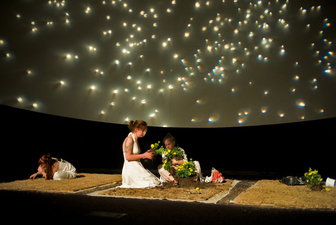 Plot
Plot is a staged performance with a soundscape and built light environment, made with Eames Armstrong and Ian McDermott.
Image: Frank Hallam Day 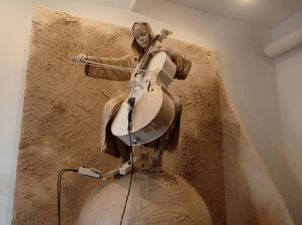 Living Sculpture
Separate but interacting vignette stages house individual performances as Living Sculpture's task-based activity cycles through making/un-making. Time markers that form flexible but regular intervals are made visible through labor and product, while time itself is suggested as simultaneously progressing, inverting, and held in suspension. Image: Steven Cummings 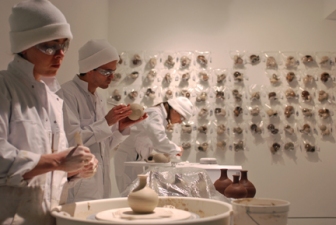 STASIS
Workers on the STASIS production line make objects (vacuum-sealed packages of still-moist pottery) that are weighed and priced at $22/lb. Packages are tagged and available for sale.
Image: Mary Coble 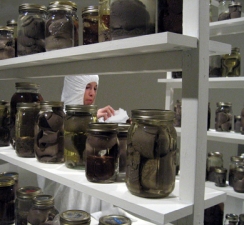 Dissolve
Dissolve puts a full-scale production line on display in the gallery. Labor sets its sights on "perfection" and preservation while the product inevitably falls apart. Image: Mary Coble